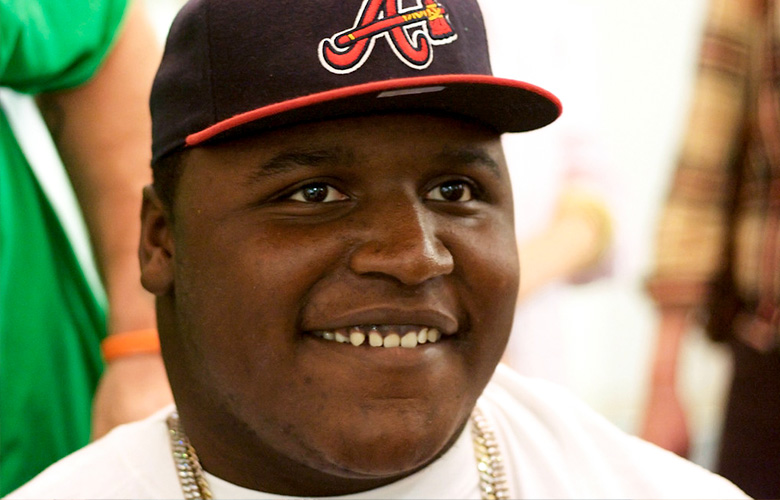 This story revolves around Darius Weems, a 23-year-old man who recently launched his rap career. His album from New Sound Entertainment, My Life in This Chair, is out and has received rave reviews. I’m arguably not the best judge of rap music, but I think his music is great.

Darius is living with Duchenne Muscular Dystrophy (DMD). One in every 3,500 boys is born with this fatal disease and generally lives only into his teens or twenties (WebMD). It’s the disease that Jerry Lewis’s telethons raised money to try to cure.

In 2005, Darius and his friends wanted to raise awareness of DMD among young people and raise money to research a cure. Darius realized that the younger generation didn’t watch Jerry Lewis, or even know who he was, so Darius sought a more relevant way to connect with younger kids.

That’s why he went West. When Darius was 15, he and his friends took a road trip from his home in Athens, Georgia to Los Angeles to try to get MTV to feature him on their hit show “Pimp My Ride.” This show regularly tricked out cars and had a huge following. Darius had written to the show about pimping his wheelchair but was told they wouldn’t do it. Darius and his friends wanted to visit the show in person to convince MTV that it would be fun and a great way to raise awareness of DMD.

To pay for their trip, the friends had barbeques and got $10 sponsorships from local businesses and citizens. In return, the boys promised to make a movie about the trip, giving each sponsor a credit in the movie. Their trip west was filled with fun, adventure, and a slew of great people who helped along the way

MTV ultimately said “no,” so the trip didn’t result in a wheelchair pimping. Not until the kids got back to Georgia, that is. There, businessman Clifton Duffie, who heard about the adventure, had a pimped-out wheelchair waiting — complete with spinners, a video game system, stereo, subwoofer, and more. Children’s Wish and Mobility Design had given the wheelchair to Clifton, and he tricked it out.

The kids made their movie, Darius Goes West, with all proceeds going to DMD research. Who would have guessed that the movie would win 25 awards, raise over $2 million for DMD research, and be distributed on over 85,000 DVDs even though it was available online for free? Not to mention that Darius Weems would tour the country, visiting hundreds of schools to talk about DMD.

It’s an incredibly well-done movie, especially considering that Logan Smalley, the director and one of Darius’s friends, had to buy a book to learn how to edit their footage. At the end of the movie, Clifton, who customizes cars, said about Darius, “[He is] a true customizer. [He] sees something for what it could be, versus what it is.”

Darius can teach us a lot:

1) Nothing needs to hold you back. Certainly, nothing is holding Darius Weems back.

2) The journey is more important than the destination. They were travelling to LA to meet with MTV. That meeting didn’t turn out as they hoped, but the trip was an amazing success because of what they learned, the fun they had, and the awareness they raised along the way.

3) Having a purpose keeps you going. The RV had a breakdown, they drove through a tornado, and they lived through other adventures. Their purpose – to raise awareness – kept them focused and kept them going.

4) Don’t give up. MTV wound up airing Darius Goes West on two of their stations.

5) Treat physically disabled kids like anyone else. In one part of the movie, the kids offer Darius $10 to eat a spoonful of Wasabi in a restaurant. Darius is tearing up, snot is coming out of his nose, and he needs a ton of water. Apparently, some of the patrons thought it was mean. Darius said it was great to be treated like a normal kid. That’s all he wanted.

6) Most important, you can make a difference. Darius Weems traveled around the country and raised over $2 million for charity when he was a teenager. Now he’s 22 and launching his rap career.

See what could be, not what is.

Let’s do something that matters.

Keep up with Darius Weems on his blog and Facebook.

If you liked this post, you’ll also enjoy the post about Jack Andraka, an inspirational 15-year-old who invented a cancer diagnostic test 100 times more sensitive and 28 times less expensive than what’s currently available.