There are Hundreds of Languages Around the World, and a Smile Speaks them All 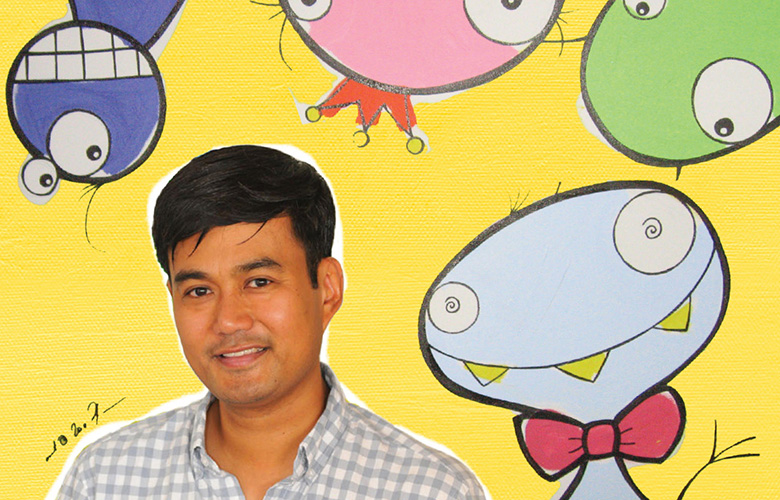 Artist Bren Bataclan, who gives away free paintings to give back.

Bren Bataclan was a successful graphic designer during the tech boom. Then the dotcom bubble hit, the economy crashed and in 2000 he found himself unemployed. For the next three years, he scrambled to find odd jobs and was barely able to pay his bills.

“I was desperate—losing weight out of misery,” Bren says. “Even though I was being really optimistic, misery manifested one way or another. So I tried many things to help my mind-set, including painting.”

Bren had loved doodling as a kid and decided to paint the whimsical characters he’d created in his childhood. And in 2003, he unveiled fifty-six of those paintings during an open studio in Boston—and sold forty-nine of them the same weekend. 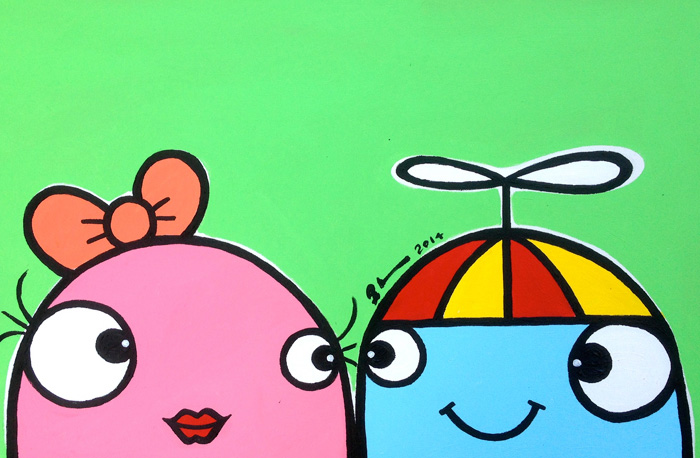 Overwhelmed, Bren wanted to pay Boston back for its support, and he decided to paint thirty more paintings that he would give away. In the fall of 2003, he started leaving his work on park benches and at hospitals, train stations, museums and malls. The note accompanying the art usually said, “This painting is yours if you promise to smile at random people more often.” The note also included his URL.

Bren recalls a cold gray day in February when he left a painting on a park bench in Cambridge. “Immediately, a young couple approached the bench. At first I was concerned for the woman because she was wearing these neon-pink shades with almost pitch-black lenses. I was worried that she wouldn’t see the ice and slip. But fortunately, the couple didn’t have trouble picking up the painting and they walked off happily with their found art.”

Months later, the couple sent a message saying they’d like to meet Bren. “A few days later I heard a knock on the door, and when I opened the door, guess what—she was still wearing the same exact shades. Except this time it was more appropriate. It was a sunny spring day. Then she hugged me and removed her shades, and I saw that a portion of her head was sort of caved in, the part that her shades were hiding. She told me that she and her husband found a painting during her first week of chemotherapy and that it helped them deal with her illness and treatment. At this point we were all crying. And it was also then and there that I told myself I will continue giving away paintings no matter what.”

Even as he continued searching for a job in the traditional design field, Bren continued giving paintings away. Eventually, the Boston media caught wind of what he was doing, and he became one of their favorite subjects. As a result of this exposure—Katie Couric even did a spot on him on the CBS Evening News—Children’s Hospital of Boston and Boston University both commissioned pieces from him, and local schools invited him to talk to students about random acts of kindness. And then they hired him for mural work.

In other words, business took off.

“After a couple of years, I finally said, ‘Hey, you know, I think I can do this full time.’ So, through all of this—the challenges and hardships—I found my dream job. I had no idea that I was going to become a full-time artist. I just wanted to thank Boston for buying all the paintings and then use my art to help people smile more.”

That was fifteen years ago. Since then Bren has painted about 150 murals and given away about 2,500 paintings in seventy countries and all fifty U.S. states. He’s given away about half the paintings himself thanks to a Kickstarter campaign that raised money to cover some of the expenses, including a road trip across the United States. 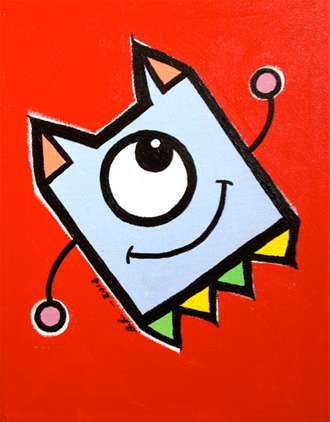 Friends and clients have also helped immensely with distribution. “One was given away in Antarctica by a client of mine who went on a cruise, and a friend of mine who’s in the military gave away paintings in Afghanistan and Djibouti (Africa).” Bren’s hope is to eventually give out one painting in every country in the world.

The pieces usually come with the note about smiling, but during tough times he’ll leave his artwork outside unemployment offices and shuttered stores with a different note: “Everything is going to be all right – this painting is yours to take.”

And for some, his art has played a pivotal role in making things all right.

“After the death of my husband and during his terminal illness, my adult son had a mental breakdown, and not too long after my husband’s death he disappeared,” says Johan Beckles of California. “I had not seen my son in nearly four years. And then there was this miraculous newspaper article and there was Yusef.” The San Francisco Chronicle had published a photo of her son, picking up one of Bren’s paintings at the BART station in San Francisco. Thanks to the painting and the newspaper story, Johan was able to find Yusef and reunite with him. Johan now refers to Bren as her “adopted son” for all he did for her family.

Then there was Bren’s friend who gave away a painting while working at a midwestern college. The college student who found the artwork sent Bren a message explaining the insurmountable challenges he’d been facing at school and his thoughts of committing suicide. He told Bren that finding a painting on campus was one of the reasons he decided not to take his own life.

A portion of his message read: “I came across your painting. It was like something or someone was smiling down at me. Finally, that painting gave me the strength to carry on that day and during the next few days.”

As for Bren’s view of his work, he says he has a dream job.

“I make people smile. Never in my wildest dreams could I have imagined becoming a muralist, let alone a full-time artist. Who would have thought that by thanking Boston I would have found my life’s work?”

You can check out Bren’s wonderful work here.

Want more good news in your Facebook feed? Then consider clicking this link and liking my Facebook page. You’ll get inspirational stories, good news and a focus on the positive. (About one post a week.) Thanks!

If you enjoyed this smile, please share:
More Stories