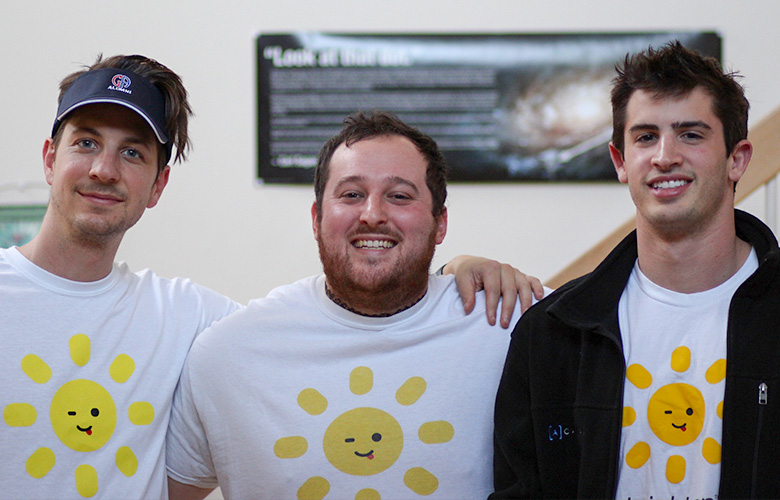 On March 31, 2013, my friend Oliver passed away in a rock climbing accident. After he passed, friends from throughout his life began sharing positive memories on his Facebook wall. I wish he could have seen those when he was alive.

Inspired, I bought a box, a pen, and a stack of note cards, and then left my newly created “compliment box” on a table outside our campus house. As people walked by, I handed out note cards and asked them to write something nice about a friend and drop it in the box. Students came from all over campus to drop notes in the compliment box.

Everyone would gather around as we opened the box and read the compliments aloud. Some notes were really nice and loving, and others were hilarious. They were fun to receive and even more fun to write.

It brightened someone’s day each time they received a compliment, and I want to extend that feeling to as many people as possible.

Inspired by the reactions to his compliment box, Austin created Brighten, an app giving anyone access to the compliment box. The app allows people to share compliments (Brightens) anonymously or as themselves.

Austin launched his app winter of 2016, his senior year at Bucknell University. He expected 15 or 20 kids to use it. He was wrong. The app quickly had thousands of users. In fact, the high usage crashed the app, and Austin had to take it down and have a programmer rebuild it capable of handling higher volume. The app spread through volunteer student reps – 2,000 kids, mostly in high schools, who promoted Brighten. Students hoping to decrease bullying and create a more caring school culture.

To date, about 3 million users have sent 30 million Brightens. The results? Schools where students use the app have reported a reduction in bullying and a kinder environment. (By the way, the app uses technology to keep hurtful comments from being posted.)

The app was originally based on the compliment box – to connect with friends you already knew and send compliments. However, kids wanted to connect with others using the app, so Brighten also built community pages — advice pages where users can ask for advice and anyone can see it and chime in.

“A lot of middle school and high school aged kids are on our app, and because it’s anonymous they feel more open to talking about their problems and admitting to not feeling so happy and needing their day brightened.  Our plan wasn’t to find kids who needed help and help them.  It just happened,” says co-founder Alec Lorraine.

“We can see when kids are in distress and we send them a brighten, ‘Hey, sorry you’re feeling down right now.  If you want to talk respond to our message.’ We can also catch them in a moment of peak distress – I’ve been able to tell them ‘I’m here to listen to you,’ and refer them to a suicide hotline.  The entire Brighten community is very supportive. We get a lot of ‘thank you’, ‘I just needed someone to talk to’ and ‘you really helped me out.’”

As for the compliments, they’re perspective changing. “A lot goes unsaid. Especially in high school.  It is a weird awkward time. Brighten is a way students can share a compliment, dip their toes in the water of giving compliments, and then do it in real life. We’ve heard from many users that Brighten is the start and that from there they express their compliments in person,” Alec says.

Austin said the feedback from kids has been awesome. “You changed my life, “It changed our culture”, “School has never been this happy”, “I started viewing life in a different mindset.”

Why does Brighten have such an impact?

Because kind words can go a long way.

Austin’s goal is to make a billion people smile. I love that mission.

Want more good news in your Facebook feed? Then consider clicking this link and liking my Facebook page. You’ll get inspirational stories, good news and a focus on the positive. (About one post a week.) Thanks!

Here’s a great act of kindness idea for families, teams, classrooms and other groups to share compliments. You might also be interested in checking out this link to 103 Random Acts of Kindness.